"Those who contemplate the beauty of the earth find reserves of strength that will endure as long as life lasts. There is something infinitely healing in the repeated refrains of nature-- the assurance that dawn comes after night, and spring after winter."

No work for an entire week! What shall I do?

I spent my Easter Sunday with my family down in Boston. For three days after that while it was doomy and gloomy I decided to hold off on doing the fun outdoorsy stuff for the weekend where temps would rise and the sun would be out. 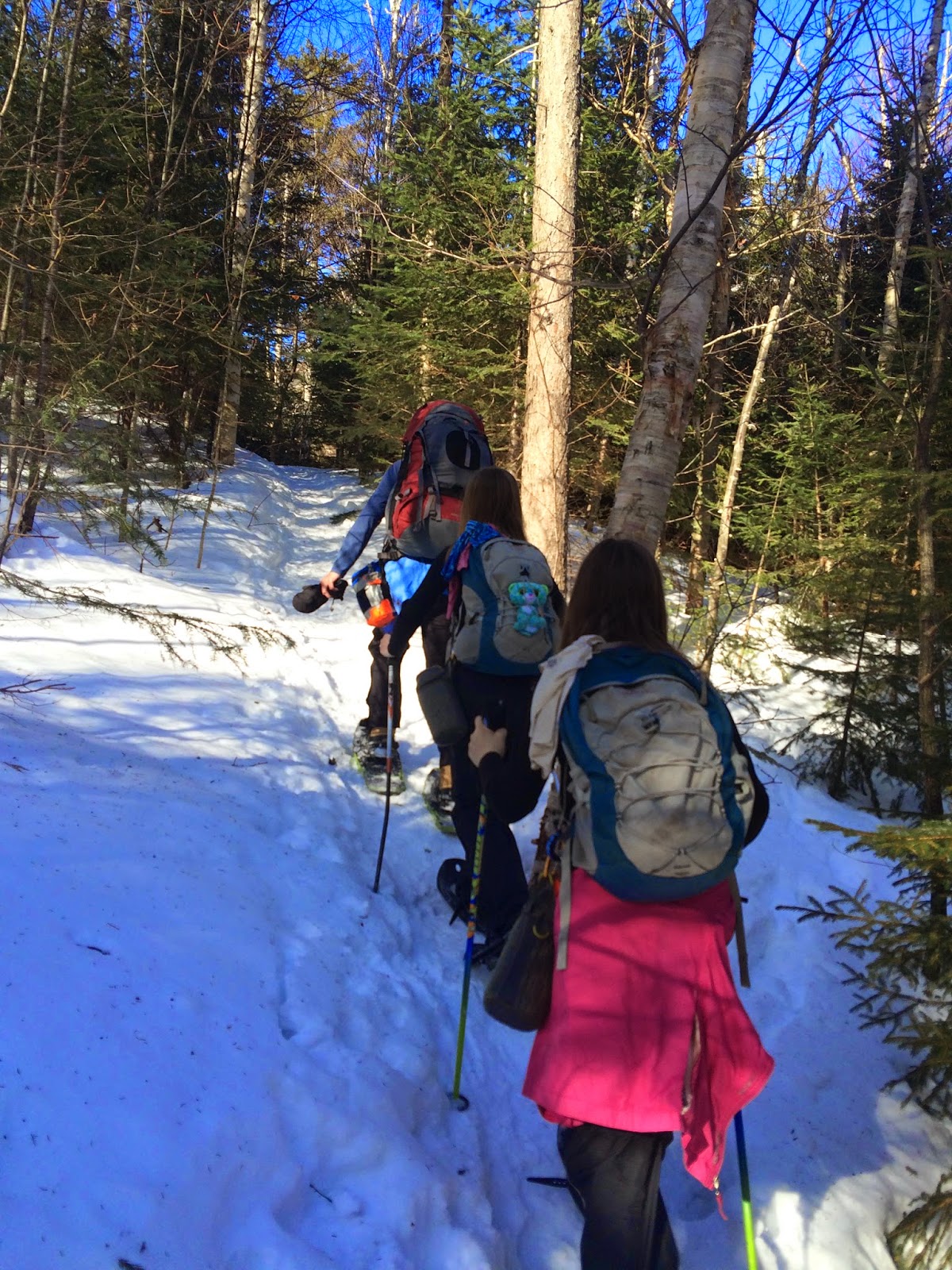 I had planned for a hike with Trish and her two girls, Alex and Sage. We originally were going to aim for Jefferson, Washington, Munroe Loop on Sunday. Given the forecast for that day, we opted out. Winds were forecasted to be somewhere in the 50's. We decided to traverse the "WTF" Range as some would refer to it as. Tom, Field, & Willey. We spotted a car at Ethan Pond Trailhead and started from the A-Z Trailhead. Temps were significantly warm, warm enough as to where your hands didn't freeze without gloves when you went to put your spikes, or snowshoes on your feet. It finally felt like spring!

I had only brought my spikes and crampons. Crampons mostly for the sake of going down the south side of Willey. I started with my spikes on as we headed up to the trail junction before Tom. It has been a good 3 years since I last did this traverse and not to mention that was in the summer. I remember the A-Z Trail starting out fairly gradual and getting steep in parts. This day though, we got to a junction and had exactly 1 mile to our Junction for Tom. From here it felt like the longest up hill battle. This I did not remember. But hey! Isn't that the best part of hiking? No matter how many times you have hiked it, it always seems as though you have never been there before.

The snow pack was perfect. There were certain spots where it was balling up underneath my feet on my spikes, but I would kick it off and keep on moving. Finally, arriving at the junction we head up to Tom. A whopping .6 of a mile each way. This I remember being gradual incline for most of the way up, sure enough it was. Once we made it to the top we took a jaunt to the lookout, and then over to the summit for some food to fill our bellies. When we approached the summit, I realized I never even made it to the actuall summit my first time up here, only to the look out.

On our way up we had a conversation about the Gray Jays and how neither of us had seen any this year. Sure enough, one came swooping in. Landing on a nearby tree, it took it's perch. Sat and stared relentlessly until someone sure enough was willing to put their hand out and give it some food. I understand the idea about the Leave No Trace rule, and that you shouldn't feed animals in the back-country. However, this is one I make an exception for. As long as you're not feeding it junk food, I can understand nuts as something you would use for these birds. Sure enough we captured some incredible photos of Alex and Sage patiently waiting for one to land on their small hands. Later to realize, we were to meet again on Willey. (If it was the same bird) 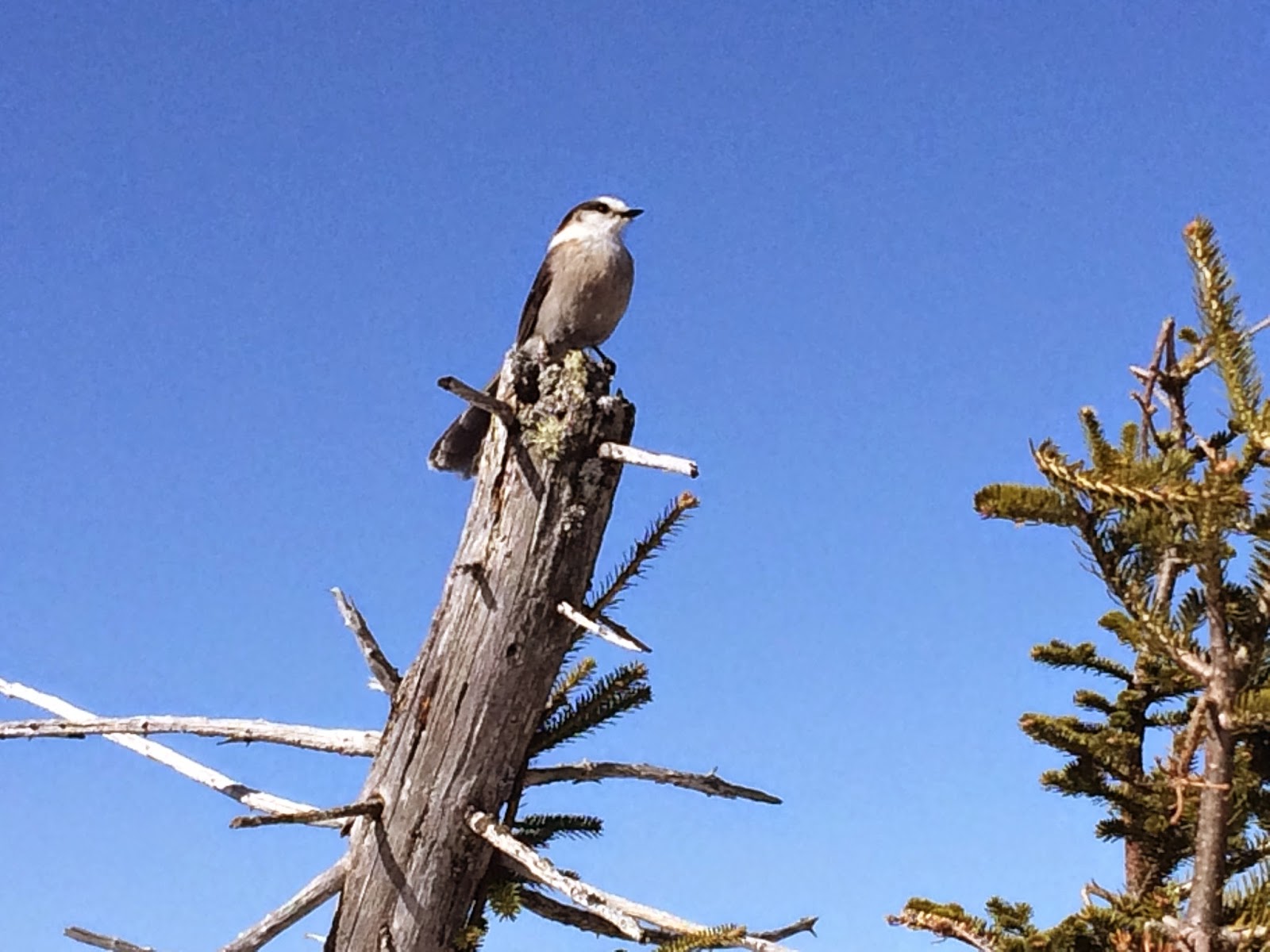 Once fueled up and ready to go, we decided to all take the traction off our feet and see how that went. It was perfect! The snow was just sticky enough as to where you wouldn't slide. We all ended up bare-booting the rest of the way back to the car.

Off to Field we went. An easy .9 mile jaunt to the next summit with some amazing views. Here I got to join Trish and the girls enjoy their "Desserts on the 48" it was Fudge on Field this time around! Here it was a bit brisk and cold as we could now feel the wind steadily picking up and whipping through the trees. So we hunkered down into the trees and enjoyed our fudge. Once done, we put our packs back on and headed towards our last peak of the day, Willey. 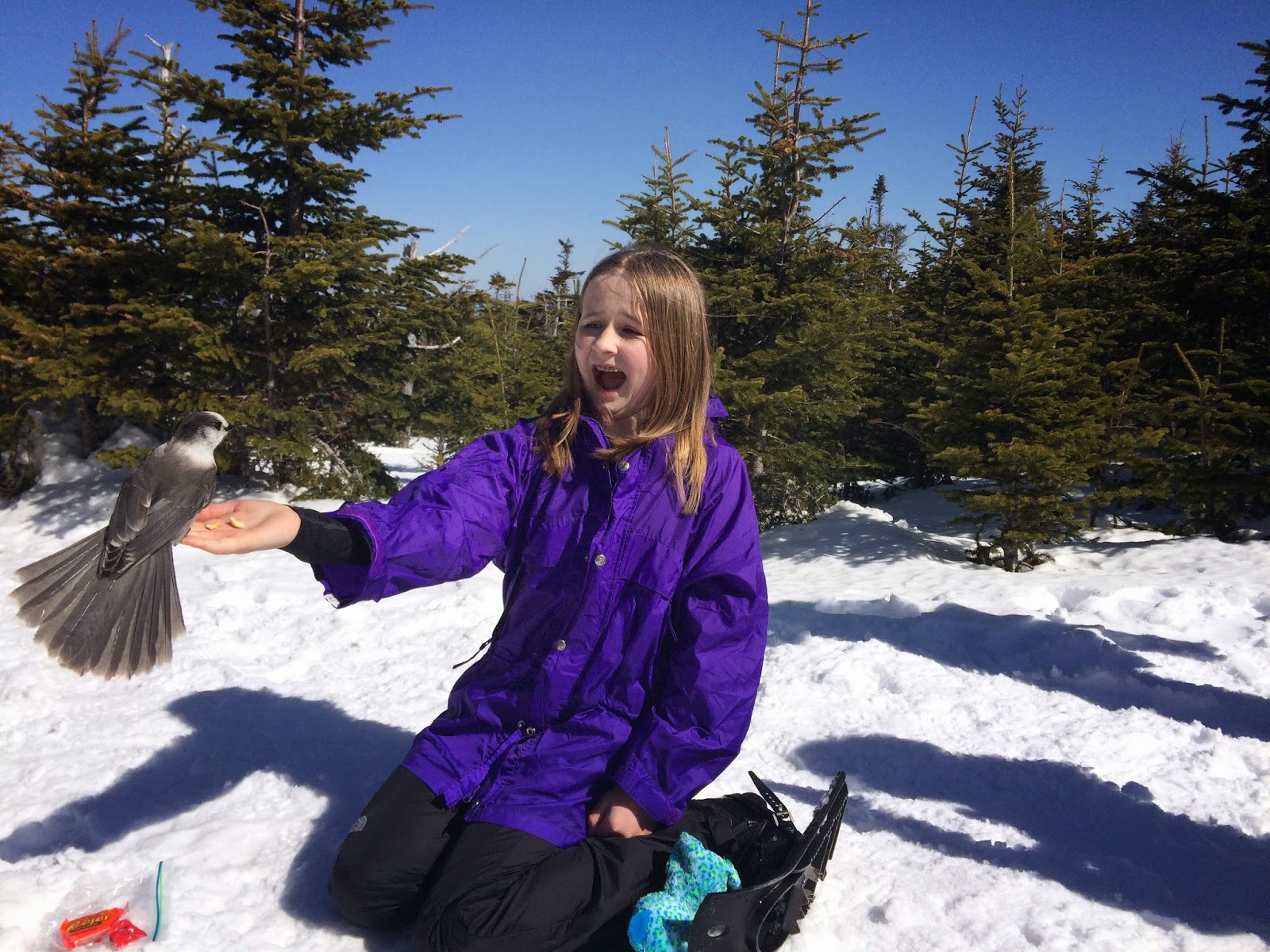 1.4miles to the summit of Willey, and again, a pretty steady jaunt over. We came across a packed out trail that may have looked like a path to somewhere. Trish checked it out to find a dead end, then Alex and Sage. Within a few minutes you could hear the girls yelling back to us "Come on, the trail keeps going! It takes you to this amazing opening with no wind and we can eat our dessert." Sure enough, those girls being so small, bushwhacked us to the summit. It was funny, and lots of fun for the short bushwhack it was. However, I am convinced that they took us right over the "actual" highest point on Willey, that most people don't bother to do in the summer because of the thick brush, and just assume the small cairn is the official summit.

At the summit of Willey we enjoyed another great dessert. Thank you Trish for letting me be a part of this adventure with you and the girls by the way! Whoopie Pies on Willey! So yummy after a long day's hike! We took in the warmth of the sun and the beautiful views from the ledge.

After a good 20 minutes or so up here it was time to make our final descent. I kind of knew I would be going down a very steep trail. I have heard things about this trail, mostly in the summer time though, but had never actually hiked it myself. Trish also had been talking about her experience on the trail with Alex one year. It sounded very intimidating.

Let's just say... this trail in the winter, is a perfect trail to practice ice axe technique, and self arrest. This trail was by far the steepest trail I have ever been on in the White's. Steeper than Lion Head Winter Route if any of you have ever been on it in the winter to ascend Mount Washington. Unfortunately, there was not many photos taken descending this route for the sake of safety. This trail, officially scared me in one spot. When you are basically hanging by a tree and praying it does not break apart and send you flying at least 50feet down, that becomes quite nerve wracking. However, Trish handled that section very well with the girls, having them not move until she said and to certain places. The girls were incredibly brave and trusting of their mother, as I sat and observed before my turn to maneuver down this section.


Incredibly enough, we made it. Finally, making it down to a descent part of the trail and butt-sledding a good portion of it out after that! Caution though, this is a trail that DOES NOT require a sled to keep you going, and going fast. This is a trail to be advised that there are extremely steep drop offs around corners you are not expecting. I do advise much caution down this trail, as well as going up. It's something to laugh about now that it is over and everyone got down safely, but one wrong move and someone could have been very badly injured. We are all smart, and cautious hikers and together I think we made a great team!

We hiked the rest of the way out back to my car at Ethan Pond Trailhead. It was a easy flat walk out with some small butt sledding areas. I had a great day. There is something to be said for a great hike and good company!

Popular posts from this blog

"And forget not that the earth delights to feel your bare feet and the winds long to play with your hair."   I have finally hiked the one trail on Mount Washington I have been avoiding for a long time. Huntington Ravine. This trail, according to the AMC White Mountain Guide is the "Hardest trail in the White Mountains." Many, claim it to be incredibly difficult, dangerous, and essentially rock climbing without the ropes. The Mount Washington Observatory hosts their largest fundraiser in July every year for the last 15 years. This even is a hike-a-thon to raise money for the nonprofit, member supported MWOBS. I have participated in this event my first year working for them and now I am participating again this year. On July 18th, Trish, myself, Alex, Sage, Hugh, Josh, John, and Jeremy decided as a team we wanted to ascend Huntington Ravine for Seek the Peak. Most of us had yet to hike this trail and were all ready to see what the big talk was all about.
Read more

"Solo travel not only pushes you out of your comfort zone, it also pushes you out of the zone of others' expectations." Monday morning I last minute booked myself a campsite at the ADK Loj for Tuesday- Thursday. I knew I needed to hike Big Slide & Giant still to catch up to Laura so we can finish at the same time. So this felt like a good opportunity. Just a few days prior I unexpectedly had to bury my brother. After losing my mother just over a year ago, losing my brother was just beyond overwhelming. Not in a million years did I think I would be back at the cemetery where my mother was laid to rest, standing next to her, and now laying my brother down to his final resting place.  I would wake up Tuesday morning, take Ricky Bobby to the vet for his shots, then head directly to my weekly therapy session. From there I would hit the road to New York for a few days. Solo. I have never just left by myself to go anywhere to camp. I always spend my time in the wilderness
Read more

"Nothing perhaps affects man's character more than the company he keeps." Last minute plans came about to backpack on Whiteface and Passaconaway mid week. Daniel still needed these two peaks for his 48 finish, and I very badly needed to escape and sleep in the woods. I knew of a stealth spot just off the summit of Whiteface so the plan was to start later and head up for the night. We both met at the trailhead by 3:15pm. We took our time and our two dogs and headed up the 3.8 mile trail to the outlook of Whiteface. We went via Blueberry ledge Trail as he had never done this hike before, I felt it would be a fun one! We made it to the outlook at roughly 6:00pm. Unfortunately to find a very large group of campers with 3 tents all on the outlook. We continued a little bit to the stealth spot I knew of and sure enough no one was there, even though this spot is large enough for several tents. Once camp was set up we took a walk over to the outlook to see if we could see the s
Read more