The Kitty in Good Company.

August 19, 2013
It was Garfield I had in mind for today. A solo hike to Garfield to knock off another on my list. When I posted my plans online, a friend, Whitney had messaged me and asked if I would like to hit the Wildcats instead. With my plans being Garfield on Monday and Wildcat A on Tuesday- I agreed. We planned to meet at 19 Mile Brook Trail at 8:30 am. We spotted her car there and took mine back to Glen Ellis Falls to start our adventure.

This was the first time either one of us had hiked with each other. We totally hit it off within minutes of getting on trail. We had the conversation about what to expect. I had previously hiked Wildcat Ridge when I had hit Wildcat D back in November. I knew it was steep and rugged. So, up the trail we went. And when I say up- I literally mean UP. We chatted pretty much the entire way up and I have no idea how we did it and kept a good pace.

Finally bursting out onto the ledges we received our first views of the day. 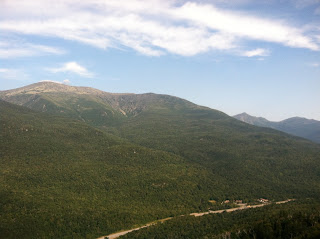 With my car still in sight, we knew we had come a long way up but not far enough. We continued to chit chat about life and how much we both enjoy hiking and how we ended up here. We were both in the zone so much that, I couldn't help to think we had missed the built in "steps." Oh LOOK, as we rounded a corner of some more steep scrambles, there they were. 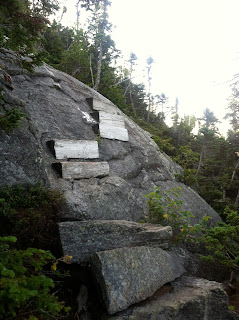 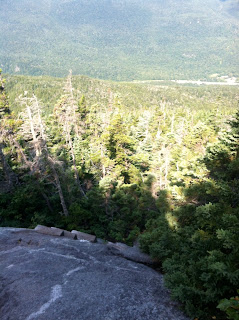 As Whitney likes to say "Pud" after "Pud" or "Natures Stair Masters" had pretty much taken over our first 2 miles, we finally reached the Wildcat Ski Resort. Just in time to take our picture on the Observatory's web cam! It was quite the discussion for 3 minutes on what we should do for a pose. We hope someone got to enjoy it, I know we sure as hell were laughing about it for the next few minutes up to the actual summit of Wildcat D.

Here we reached the observation tower, where we stopped to take a few photos and eat some food. Food that was well deserved after the rock climb we just endured. 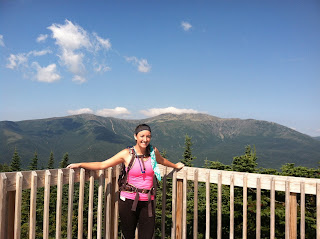 We had one down with one more to go! Wildcat A.. here we come! On the trek over Wildcats C and B on our way to A, we discussed the possibility of getting to Carter Dome since Whitney needed all of the ones on this range. I just need A to complete this range for myself. After many more scrambles of up and downs we finally came upon what looked like the summit we had been hiking towards! Yes, here it was. With one beautiful view into Carter Notch to the Hut and Lakes. 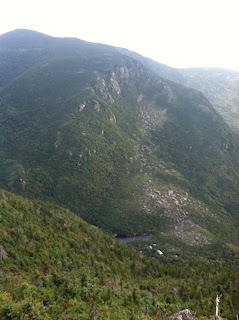 Here is were the true fun began. She asked me where Carter Dome was. I pointed it out and then we discussed a little further into what we should do. Our plan was to make it to the hut and go from there. We quickly took out our cameras to take some photos and then had a great in depth conversation about selfies, which resulted in this one. 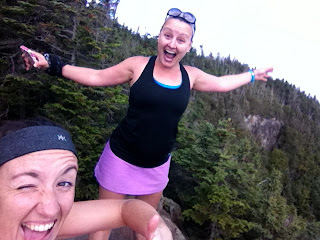 and then this one.. 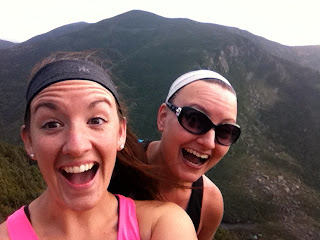 Not realizing the best pictures of the day were our selfies, we put our packs back on and headed down one hell of a steep section to the hut. In passing we ran into about 6 thru-hikers. All NOBO's. One asked if we were sure that this was the actual summit of Wildcat D, in which I replied I am almost positive. Another said "Ok, but if it's not we know where you are going and will find you."

Fun and enthusiasm are always welcome on trail! I love it. Shortly after our trek down steep steep terrain, we arrived at the lakes and then the hut. It was gorgeous down there. It almost looked like this lake and then a beach hidden in this notch of the mountains! 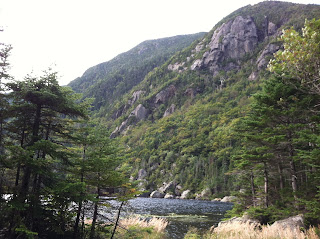 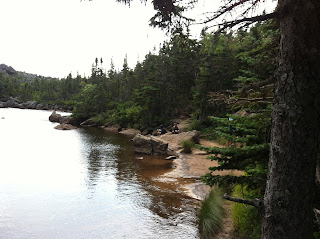 After taking entirely way too much time taking photos of the lakes and surroundings we finally made it to the hut just before 1:00pm. Torture? Yes, I'd say we both felt as though we tortured ourselves by walking in the door to the sweet smell of yummy deliciousness that was being put out on the tables and cooked. At that very moment we both looked at each other and immediately were like, lets get the hell out of here before we stuff our faces and can't move! We both used to bathroom and grabbed a small snack and headed back to the trail junction. 1.2 miles to Carter Dome, we both stopped looked at each other and pretty much were ready to rock this! That we did. Just not without panting haha. We knew it was going to be steep from the contour lines, but wow. The Wildcats/Carter range is no joke.

We stopped at some really great viewpoints on the way up to Carter Dome. Where we saw this great rock face & this is where Whitney proceeded to tell me to go find a way to the top of it and she will take my photo.. Unless I could fly there was no way in hell I was getting on top of that rock. Tis' why we both laughed. I would have been like a secret Bond photo, just in Carter Notch! 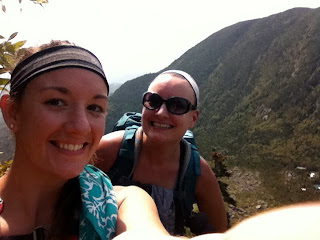 Took some more selfies. It was the lesson for the day. "How to take selfies like a pro." Made for great entertainment. Every corner we turned and I looked up, I swore it was flattening out. But then quickly realized it was never ending. Finally after a few good serious convos to take our minds off the climb, we finally reached the top. Well, what we weren't sure was or wasn't the top. Who ever was the idiot who decided lets put a huge pile of rocks at this spot to trick people like US, is a cruel cruel man. I took Whitney's photo on this pile of rocks before realizing, this wasn't it.


I had been to Carter Dome last fall but it was socked in. I remember it being a pretty large open summit. So where we were couldn't have been it. So we walked less than a 10th of a mile and there is was. Carter Domes summit. Here we took more photos and munched on a small snack. 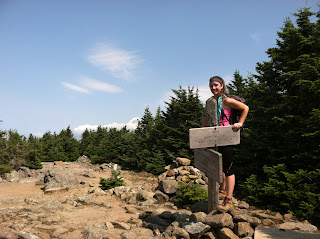 Good ole Carter Dome! We moved off this summit and onto our final summit of the day. We were off to Hight. When we came to the first junction, the Black Angel Trail, we were a bit confused. Double checked the map, and led us literally 5 steps down the trail. Here we both busted out in hysterical laughter. Yup, leave it up to us to not just look ahead, because we clearly would have seen this trail junction from the last. It's ok, we struggle. We took the Carter Moriah trail up to the summit. The wind was howling and the Presidentials were starting to all have clouds covering them. We layered up, I took out my fluffernutter, and we took some photos. 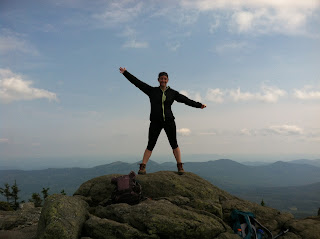 After chatting with the few thru-hikers we met along the way on Wildcat, we all started down to Zeta Pass. Here we split from their pack & both secretly wished we could have just tagged along. One of them joked that he thought we were just going keep on trekking with them right until Maine.

We followed 19 Mile Brook out and back to the car.

It's not a hike until someone falls. I had that covered on the way out. More than once. In the process of talking about balancing on the rocks in the Whites I stepped onto a rock that was a loose round rock and rolled from underneath my foot, as I graciously fell on my butt. We were both mildly entertained by my gracious falls, as Whitney referred to them as. With my gracious falls and her arms swings from insects rubbing up against her arm, we had quite the enjoyable trek! Probably one of the bests I've had in a really long time.

There is no better time and place to get to know someone than when you are out in the woods on a trail. We made an awesome adventure out of our day. We both stuck it out and pushed ourselves much further than we had both anticipated.

Popular posts from this blog

"And forget not that the earth delights to feel your bare feet and the winds long to play with your hair."   I have finally hiked the one trail on Mount Washington I have been avoiding for a long time. Huntington Ravine. This trail, according to the AMC White Mountain Guide is the "Hardest trail in the White Mountains." Many, claim it to be incredibly difficult, dangerous, and essentially rock climbing without the ropes. The Mount Washington Observatory hosts their largest fundraiser in July every year for the last 15 years. This even is a hike-a-thon to raise money for the nonprofit, member supported MWOBS. I have participated in this event my first year working for them and now I am participating again this year. On July 18th, Trish, myself, Alex, Sage, Hugh, Josh, John, and Jeremy decided as a team we wanted to ascend Huntington Ravine for Seek the Peak. Most of us had yet to hike this trail and were all ready to see what the big talk was all about.
Read more

"Solo travel not only pushes you out of your comfort zone, it also pushes you out of the zone of others' expectations." Monday morning I last minute booked myself a campsite at the ADK Loj for Tuesday- Thursday. I knew I needed to hike Big Slide & Giant still to catch up to Laura so we can finish at the same time. So this felt like a good opportunity. Just a few days prior I unexpectedly had to bury my brother. After losing my mother just over a year ago, losing my brother was just beyond overwhelming. Not in a million years did I think I would be back at the cemetery where my mother was laid to rest, standing next to her, and now laying my brother down to his final resting place.  I would wake up Tuesday morning, take Ricky Bobby to the vet for his shots, then head directly to my weekly therapy session. From there I would hit the road to New York for a few days. Solo. I have never just left by myself to go anywhere to camp. I always spend my time in the wilderness
Read more

"Nothing perhaps affects man's character more than the company he keeps." Last minute plans came about to backpack on Whiteface and Passaconaway mid week. Daniel still needed these two peaks for his 48 finish, and I very badly needed to escape and sleep in the woods. I knew of a stealth spot just off the summit of Whiteface so the plan was to start later and head up for the night. We both met at the trailhead by 3:15pm. We took our time and our two dogs and headed up the 3.8 mile trail to the outlook of Whiteface. We went via Blueberry ledge Trail as he had never done this hike before, I felt it would be a fun one! We made it to the outlook at roughly 6:00pm. Unfortunately to find a very large group of campers with 3 tents all on the outlook. We continued a little bit to the stealth spot I knew of and sure enough no one was there, even though this spot is large enough for several tents. Once camp was set up we took a walk over to the outlook to see if we could see the s
Read more